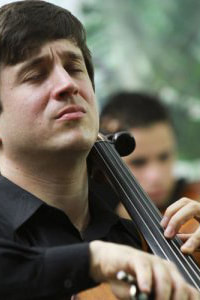 Leonardo Altino, cello
​
​Born to musician parents in Pernambuco, Brazilian cellist Leonardo Altino began playing the cello at the age of six and gave his first performance at the age of eight. His national breakthrough came at fourteen when Leonardo was the youngest winner at the Jovens Concertistas Brasileiros, a prestigious competition in Rio de Janeiro. By fifteen, he had performed as soloist with every major orchestra in Brazil and worked with renowned conductors such as Eleazar de Carvalho and Isaac Karabitchevsky. Praised by the Strad magazine for his “exceptional musical intelligence and an exceptionally cultivated sound," Leonardo was the first-prize winner at the International Cello Competition in Viña Del Mar, Chile, and he has since appeared as concerto soloist and in solo recitals in Argentina, Brazil, Chile, Colombia, Denmark, Germany, Greece, Italy, Korea, Taiwan, Uruguay, Venezuela and the United States.
In addition, Leonardo frequently performs in chamber music recitals, collaborating with artists such as Monique Duphil, Ilya Gringolts, Oleh Krysa, Antonio Meneses and the Miró String Quartet. Leonardo Altino studied at the New England Conservatory of Music in Boston, the Detmold Musihöchschule in Germany, and the University of Illinois, and his main teachers include Francisco Pino, Aldo Parisot, Laurence Lesser, Marcio Carneiro and Suren Bagratuni. He was a recipient of the Montgomery Symphony Orchestra Fellowship where he served as artist-in-residence. Leonardo presently resides in Madison, Wisconsin, with his violinist wife Soh-Hyun, and son David. 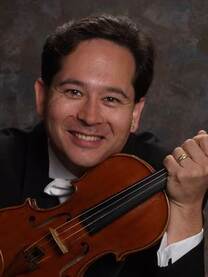 ​Paul Zafer earned an Artist Diploma from the Royal Conservatory of Music in Toronto, a Bachelor of Music in Performance degree from the University of Toronto, and a Master of Music degree from Northern Illinois University. His teachers have included his father, David Zafer, Jose-Luis Garcia, Steven Staryk, Shmuel Ashkenasi and violist Richard Young. Further studies included coachings with Pinchas Zukerman, Yehudi Menhuin, James Buswell, Joseph Silverstein, and members of the Orford and Vermeer String Quartets. Mr. Zafer made his solo debut with the Calgary Philharmonic at age 13. He has also appeared as a featured soloist with the Toronto Symphony Orchestra, the Joffrey Ballet, and the Chicago Sinfonietta. He has performed with the English Chamber Orchestra, Milwaukee Symphony, Toronto Symphony Orchestra, Santa Fe Opera, and the National Ballet of Canada.

Presently Mr. Zafer is concertmaster of the Chicago Sinfonietta. He has performed as concertmaster with the Joffrey Ballet of Chicago, Kalamazoo Symphony Orchestra, Lincoln Symphony of Nebraska, Elgin Symphony, Illinois Philharmonic Orchestra, and the Royal Winnipeg Ballet Orchestra. He is a member of the Lake Forest Symphony and the Peninsula Music Festival Orchestra in Door County, Wisconsin. He has also performed in many Broadway In Chicago shows such as The Lion King, Kinky Boots, Miss Saigon and Phantom of the Opera.

Mr. Zafer is currently on the faculty at Wheaton College and is one of the coaches for the DePaul University Symphony Orchestra. During the summers he is a faculty member at Camp Musical des Laurentides in Quebec, Canada. He has taught and coached at North Park University, the Chicago School of Performing Arts at Roosevelt University, Stanford University, University of Wisconsin-Madison, University of Missouri-St. Louis, the Royal Conservatory of Toronto, and the University of Toronto. He and his wife Betty Lewis reside in Wilmette, Illinois.